The "Hill of Hermes" and the springs in Homer's Ithaca

The great number of springs mentioned by Homer as one of the notable features of Homeric Ithaca, considered in conjunction with the innumerable springs existing in Kefalonia, -particularly in the Pronnoi district, - (in contrast to the aridity of in historical times). 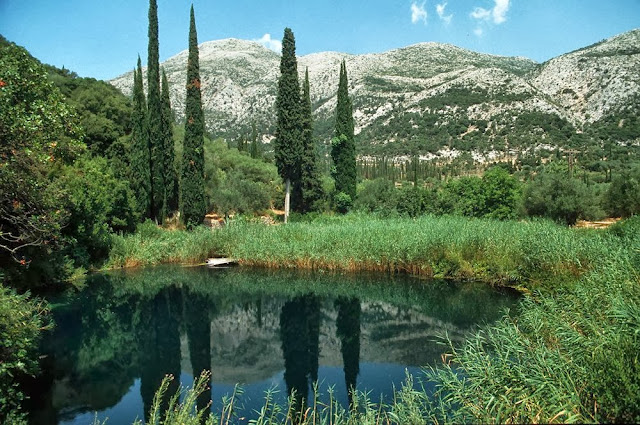 It is well known that Homer lays particular emphasis on the fact that Ithaka was noted for its numerous watering-places (Od. 13.247) and springs (Od. 17.207; 13.109, 147; 20.154). Homer's  text leaves no doubt about it that one of Ithaca's main characteristics were the  abundant water springs.This was one of the
reasons that Ithaca was well known in the land of the Achaians. These specific descriptions in Homer's text are in contrast to the aridity of  in historical times.

the rain never fails, nor the refreshing dew. It has good pasture-land for goats and cattle, trees of every kind and streams of water that never fail. And so, stranger, the name of Ithaka has travelled as far as , which, they say, is a long way away from the land of the Achaians.  Od. 13.245-249 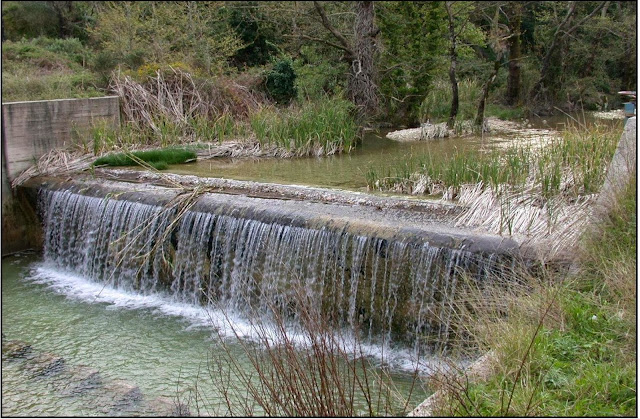 The abundant spring "Abela" at Ayia Irini. The water from this spring fills up the two technical lakes at Ayia Irini-Tzannata in the vicinity of the Mycaenean settlement and tholos tomb at South east Kefalonia. 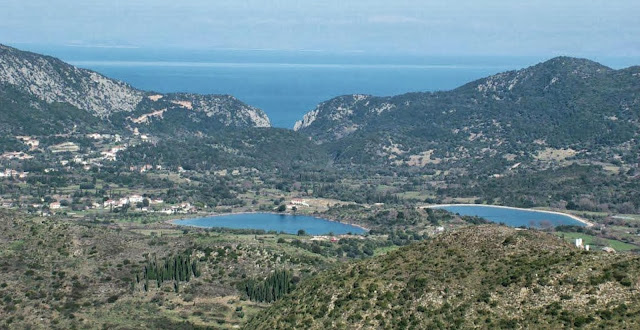 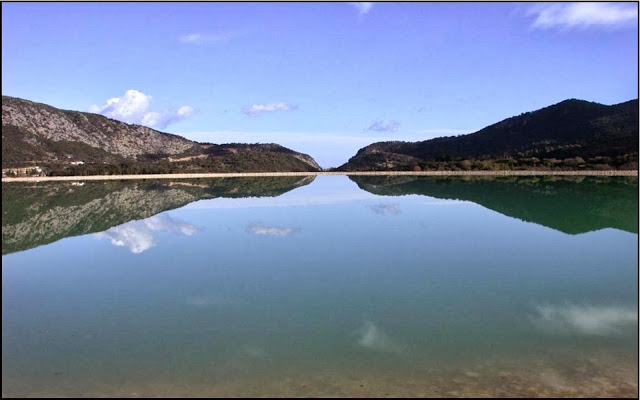 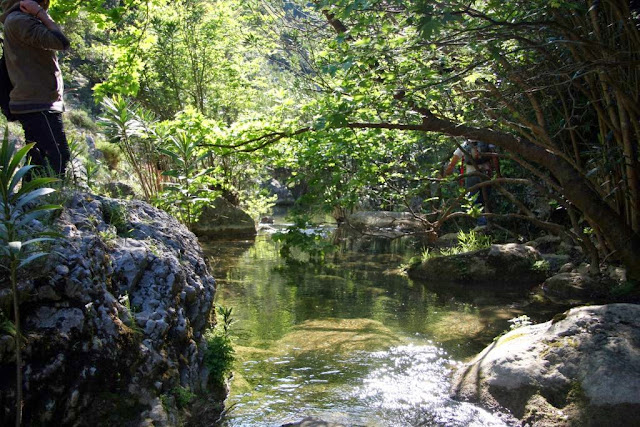 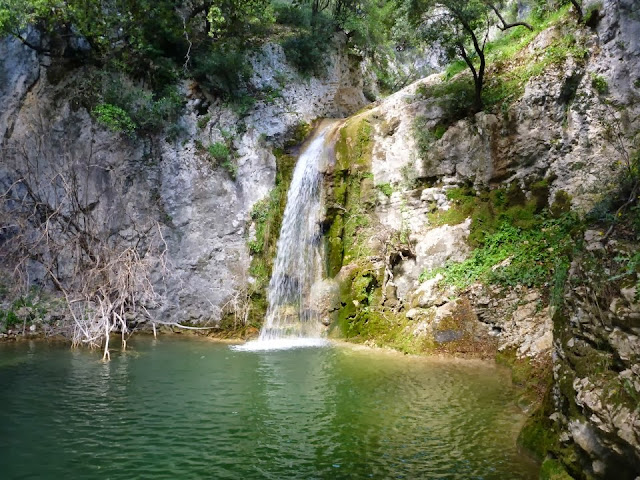 This profusion of springs, the most abundant source of water being the lake called Great Akoli, triumphantly vindicates the accuracy of Homer, who not only deems it worth mentioning but considers it to be the most distinctive physical feature of Odysseus’ Ithaca. His testimony is of the utmost significance, given that the island now called Ithaki has been one of the driest islands in the throughout the historical era. 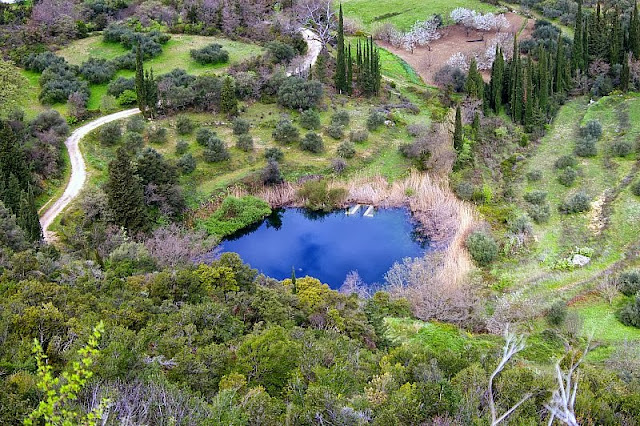 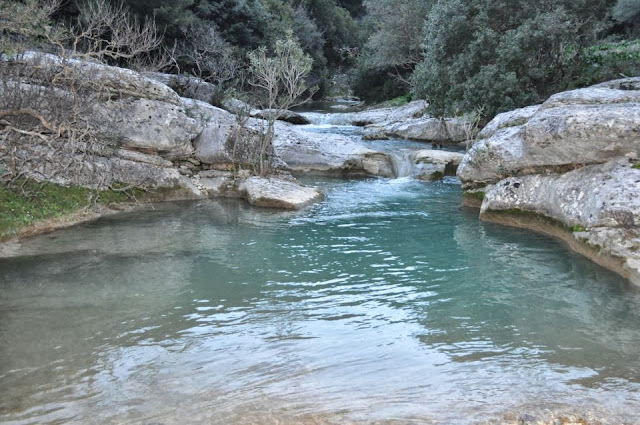 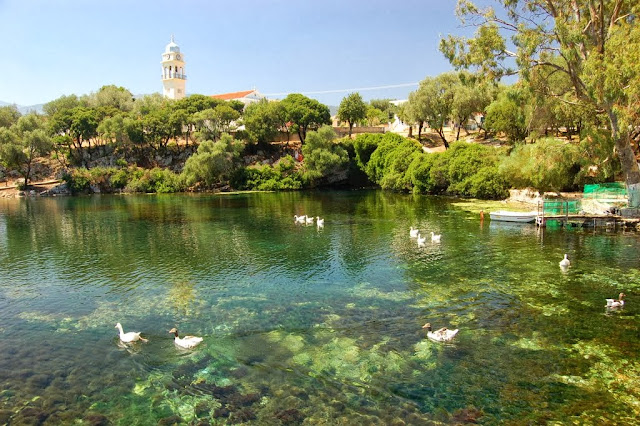 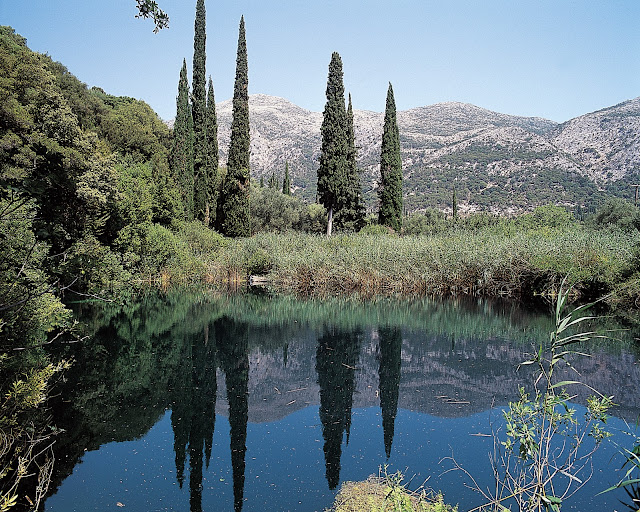 (also called Avythos) at Ayios Nikolaos, a village in the Pronnoi district, where the
outflow of water for the local water supply and irrigation is over  per hour. 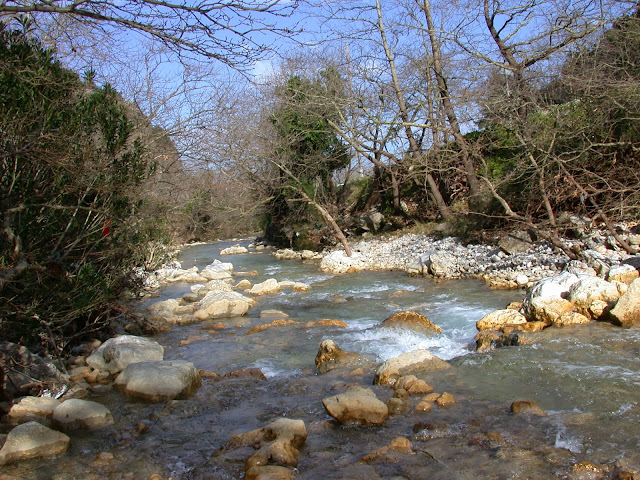 The water outflow from  Lake - spring Akoli in winter time.

Another source of water that Homer describes in some detail was the ‘well-built fountain’ (Od. 17.204-211) near the town.

Beside the rocky path which they followed down, and not far from the city, there was a public watering-place, where a clear spring ran into a basin of stone that Ithacus, Neritus, and Polyctor had made for the townsfolk. A thicket of [poplars], flourishing on the moisture, encircled the spot. The cool stream came tumbling down from the rock overhead, and an altar had been erected up above to the Nymphs, where all travellers paid their dues. 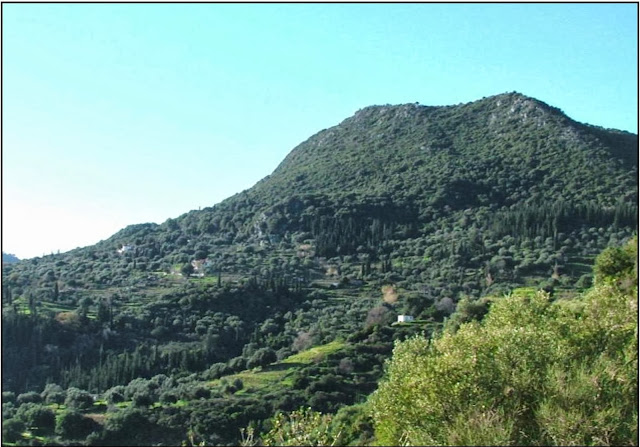 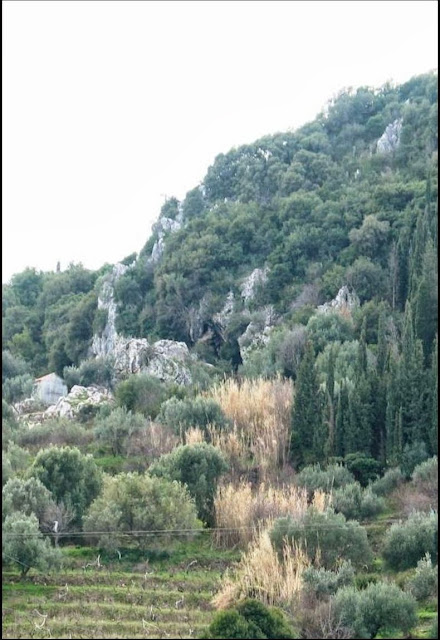 And indeed, south of the modern , among the ruins of the ancient port of the Pronnaians,[i] is the main source of water for the neighbourhood: the Kolokasi spring.[ii] This spring supplied water to the acropolis of the of in antiquity, to the colony of Maltese farmers brought in by Napier under the British Protectorate,[iii] and to the modern town of when the area was resettled after the catastrophic earthquakes of 1953.
What is particularly striking about it is that the water gushes out of a great rock, and hewn out of the ground next to the rock is an ancient pit or cistern measuring 7×8×3 metres, obviously made as a reservoir for a large quantity of water to be channelled to the rest of the city. 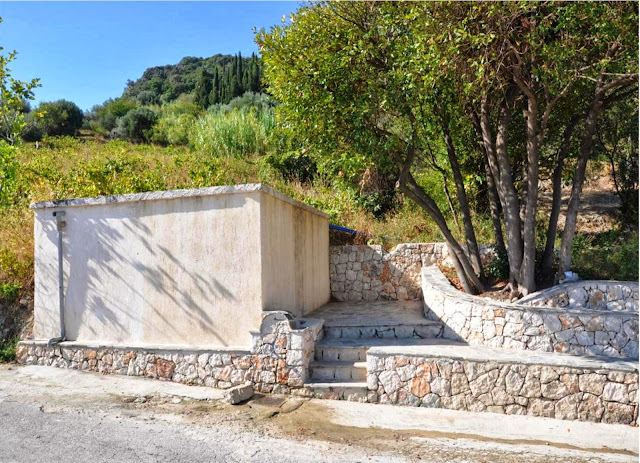 The spring "Kolokasi ". The new 'well-built fountain’  as it is today underneath the rock at the lacation Pierovouni. The water from this spring has been incorporated in the watersupply system of Poros village. 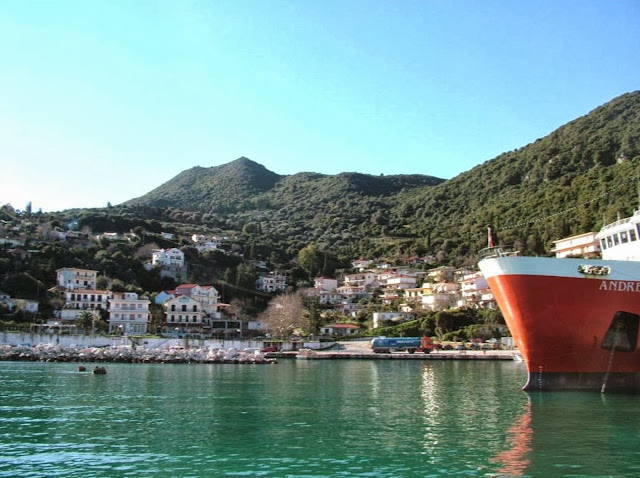 The conspicuous Pierovouni Hill (Hill of Hermes) south of the modern town of  and
the ruins of the ancient city, overlooking the ancient port of the Pronnaians.

According to Homer, the ‘well-built fountain’ lay to the south of the city on or near the Hill of Hermes (Od. 16.470-474), which overlooked the city with a view of the .

But there’s something that I can tell you, for I saw it with my own eyes. I had climbed up above the town as far as Hermes’ Hill when I spied a ship coming into our harbour. She had a crowd of men on board and a whole armoury of shields and two-edged spears.

Directly above the Kolokasi spring there is indeed a conspicuous hill called Pierovouni (Περιοβούνι) or Pyrovouni (Πυροβούνι). It is the hill that dominates the whole neighbourhood, rising directly above the ‘harbour in the river-bed’ and with a view across to the site of the city. Most probably its modern name is derived either from the verb περιοράω or περιορῶ (‘look round, watch over, guard’) and the noun βουνό (‘mountain’, Anc.Gk. βουνὸς’), corrupted from Periovouni to Pierovouni, or from the noun πῦρ (fire) [Πυροβούνι]. In either case, it would have the same signification as the other ancient ‘Hills of Hermes’, which were used as observation posts and signalling stations, with watchtowers and beacons.
What is interesting is that in the vicinity of this hill we find two place-names that deserve special study:
·      One is Diipolia,[v] a very ancient place-name that clearly indicates a connection with the cult of Zeus Polieus (Dias, protector  of the town);
·      The other is Kathares Strates.[vi]
According to Eustathius (1809.30-40), Hermes was honoured as the first herald or messenger, and also as the cleaner. In antiquity, passers-by cleared the road of stones as they went, piling the stones in heaps which they called Hermaia in honour of Hermes the keeper of clean streets.

Today, the name Kathares Strates=clean streets is applied to the extant stretch of ancient roadway passing over Pierovouni Hill on its way to the acropolis of the ancient . 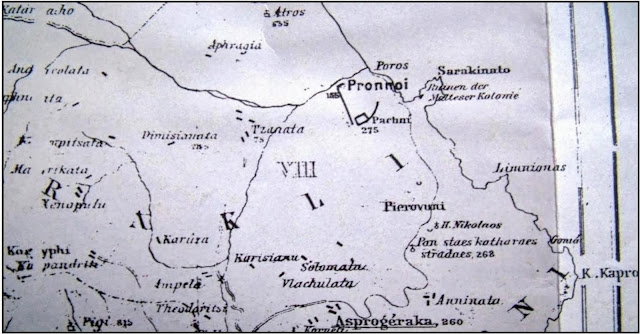 Part of Joseph Partsch’s map (1891) marking Pierovouni (Pierovuni) Hill, Kathares Strates (Pan staes katharaes stradaes), the city walls of ancient Pronnoi above Poros and the coastal locality called Limnionas or Limenia (both meaning ‘Harbour’). This last calls to mind the Homeric word Neïon, also meaning ‘Harbour’, which shows that the semantic content of the ancient place-name has survived intact to the present day.

The fact that these particular local place-names still preserve ancient memories of the cult of Zeus Polieus, and probably also of Hermes the keeper of clean streets, may be useful for future archaeological research to locate traces of the ancient cults of Zeus and Hermes in the foundations of the Byzantine churches, now reduced to ruin by the passage of time and the elements, that are still to be seen on Pierovouni Hill.
As we know, these localities near springs contain the most significant archaeological remains in south-eastern Kephallenia, which is no mere coincidence. Sooner or later the archaeologist’s spade is bound to turn up further finds yielding more definitive information about the locations of archaeological sites and their importance to Pronnaian territory as a whole, especially in the Mycenaean period. 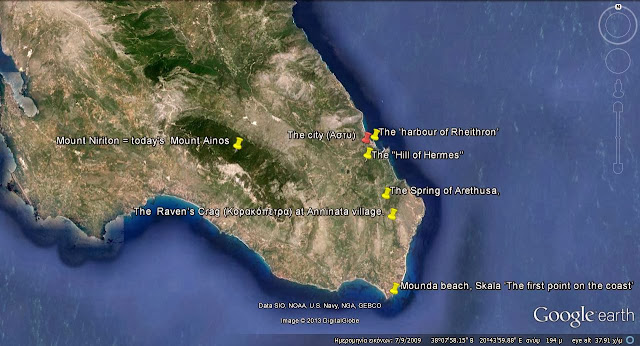