South eastern Kephallenia and the Topography of Homeric Ithaca

Recent excavations and archaeological research[i] have shown that the Pronnoi (Πρόννοι) district, in the South eastern part of Kephallenia (Kefalonia), contains a great many prehistoric sites. The outstanding find in this area has been the monumental Mycenaean royal tholos tomb[ii] outside the , which attests to the existence of a major city of some importance beyond its own borders, ruled by a Mycenaean prince.[iii] 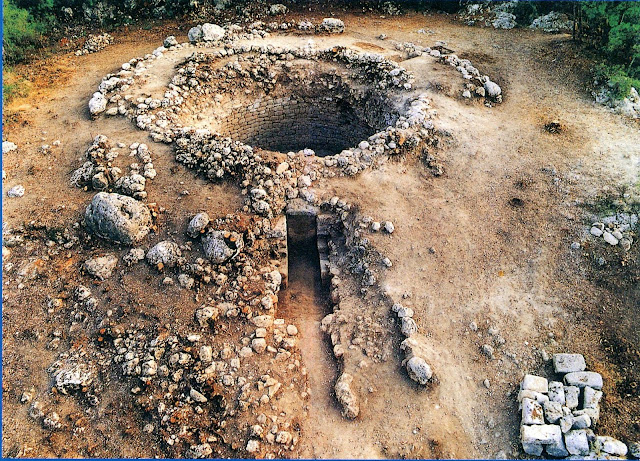 Aerial photograph of the Mycenaean royal tholos tomb at Arès near Tzannata, just outside the impressive Poros gorge, which was excavated from 1992 to 1994 by Dr. Lazaros Kolonas, who became later the  General Director of Antiquities in the Ministry of Culture.
(Photo: Lazaros Kolonas)


It is a fact that after more than a hundred years of excavations in the Ionian Islands – mostly on Ithaki,[iv] where finds attesting to Mycenaean habitation have been few and far between – it appears from the
archaeological evidence that Kephallenia as a whole was the undisputed Mycenaean centre in the islands of western .[v] It is therefore reasonable to ask whether the Mycenaean sites in the Pronnoi district could possibly be connected with the centre of Homeric (Mycenaean?) Ithaca, for which the archaeologist’s spade has been searching for so long.[vi] 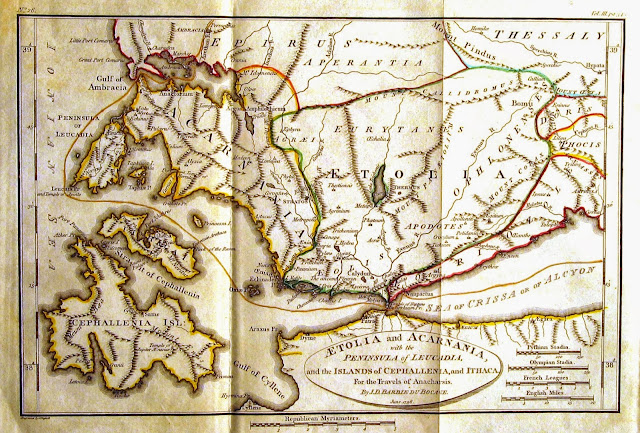 A map of 1798 showing Aitolia, Akarnania, the north-west Peloponnese and the islands of Kephallenia, Ithaki and Lefkada. The city-state of Pronnoi (Pronaea) is marked at the south-eastern tip of Kephallenia.   (Map collection of Fotis Kremmydas).

Evidently the of was one of the most important areas of Kephallenia (Kefalonia) from early historical times[i] by virtue of its strategic geographical location, since it lies in a key position[ii] for controlling ship movements in the central Ionian Sea and is the closest part of the island to the mainland of Central Greece and the .[iii] (See map, satellite images and photographs.) 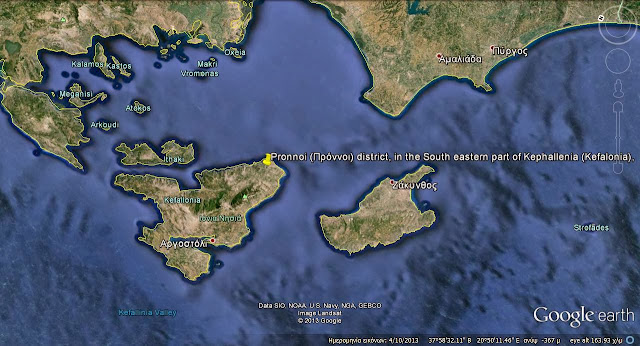 Its main marketable resource was the timber from the Mount Ainos fir forests (see coins of the city-state of Pronnoi), which the Pronnaians processed and exported from the only point on the coast where there was an outlet from the hinterland, the mouth of the Vohynas torrent, which served as the port for all the surrounding area. Their other sources of income were shipping, hunting, piracy and cultivation of the fertile and well-watered valleys of Iraklio, Skala, Katelios and Elios, where they also grazed their livestock. All these resources made the Pronnoi district an ideal location for the establishment of a flourishing Mycenaean city, and the existence of such a city has been confirmed by the archaeological finds mentioned above. 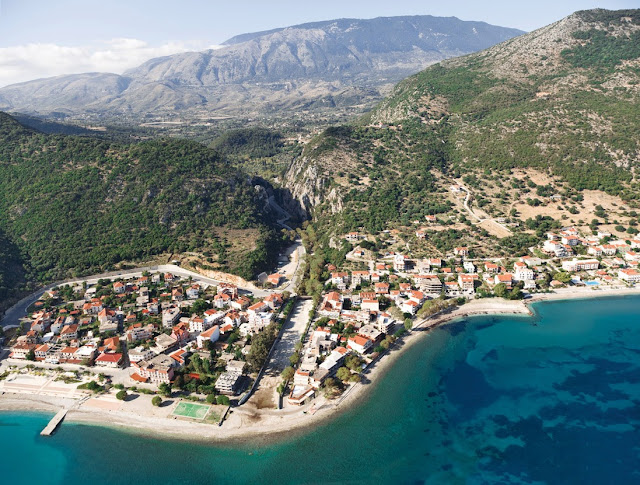 Poros . South eastern part of Kephallenia (Kefalonia)
The impressive Poros gorge . In the background is

Since the analysis and interpretation of the archaeological evidence is obviously a matter for archaeologists, in this site we shall try to demonstrate that the principal settlements in the Pronnoi district have been connected through the ages with those of the centre of Homeric (Mycenaean?) Ithaca and are clearly to be identified with them.