The ‘talking pictures’ of Homeric topography 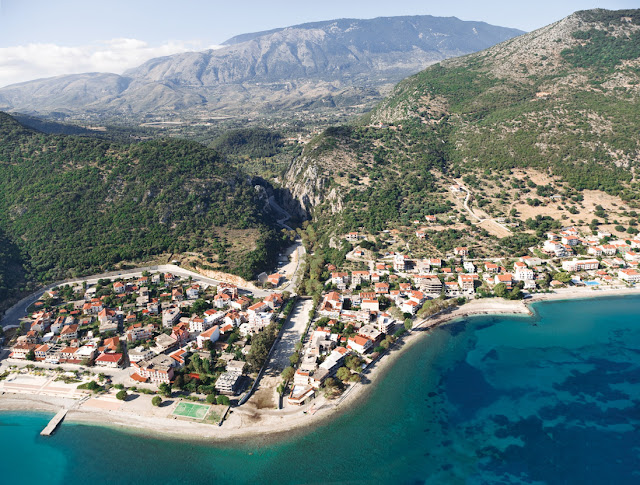 
It is a fact that the reliability of Homeric topography has  been called in question since the early years of the historical era, and the argument still rages unabated today. The unending dispute over the authorship, date of origin, composition and subsequent revision of the Homeric epics has not allowed any firm conclusions to be drawn with regard to their dating.


As far as the western Greek islands are concerned, the thorniest problem of Homeric topography has been not simply the question surrounding Ithaca itself, nor the curious confusion of the islands, nor the names of Homeric islands that have ‘disappeared’ (Doulichion, Same/Samos, Asteris), nor the new names (Kephallenia, Leukas/Lefkada) that have come into use in historical times. It is the complete inability of tne ancient commentators and travellers – and of their followers in later centuries – to locate on modern Ithaki even the two unmistakable landmarks that Athena pointed out to Odysseus so insistently, to convince him that he really was back in his homeland. One was the towering, forested Mount Neriton, so greatly famed in his time and visible from all around – even from the headland of Pheai (modern Katakolo) in the Peloponnese; and the other was the beautiful, spacious, vaulted Cave of the Nymphs dedicated to the Naiads (the nymphs of running water), described as ‘a wonder to behold’.
It is common knowledge that in the Alexandrian period, in particular, attempts were made to make the Homeric texts more conformable by ‘correcting’, adding or deleting lines. One such instance was the alteration of «εὐρεῖας Ἰθάκης» (‘broad Ithaca’) to «οὐδ’ εὐρεῖα» (‘not broad’)[1]; another is to be found in the description of Asteris, where a whole line "μεσσηγὺς Ἰθάκης τε Σάμοιό τε παιπαλοέσσης", (‘between Ithaca and rocky Samos’), Od. 4.845)[2] was added in an attempt to identify the lost island of Asteris with the islet now called Daskalio and in some way to adapt the topography of Homer’s text to the topography of historical Ithaki.
In the case of the Cave of the Nymphs, however, owing to the many details that Homer describes so precisely, it was not possible for such a vividly descriptive and highly detailed passage to be altered to fit one of the caves on historical Ithaki, as there was, after all, no such cave. The ancient commentators were therefore reduced to accepting the situation: the traveller Kronios,[3] for example, admitted that there had never been any such cave on Ithaki, while Strabo[4] informs us that there is no such cave on Ithaki but maintains that this must be due to some subsequent geological change, not Homer’s ignorance. Similarly, the Neoplatonist philosopher Porphyry,[5] in his great work Περὶ τοῦ ἐν Ὀδυσσείᾳ τῶν Νυμφῶν ἄντρου [On the Cave of the Nymphs in the Odyssey], while also admitting that no such cave existed on the Ithaki of his time, argued that Homer’s descriptions were purely symbolic and claims poetic licence.
What is certain is that Strabo tells us that even in his time (1st century a.d.) there was serious dissension over the Homeric past of Kephallenia and Ithaca: he therefore felt constrained, in the matter of the Cave of the Nymphs, to write:

for the poet does not express himself distinctly concerning either Kephallenia or Ithaca and the other places nearby; and consequently both the commentators and the historians are at variance with one another.


The question of what actually happened in the islands of Western Greece to cause such an extraordinary muddle over the modern names of the Ionian Islands is a very interesting one to which cogent answers are gradually beginning to be found.
Two works moving in this direction are the unpublished paper by the archaeologist Odysseas Metaxas entitled «Η Βιογραφία της Οδύσσειας» [‘The Biography of the Odyssey’] and the book by Dr. Vangelis Pantazis entitled Η Ομηρική Ζάκυνθος - Οι «ιερές» Εχίνες και το μυστήριο του χαμένου Δουλιχίου [Homeric Zakynthos: The ‘sacred’ Echinai and the mystery of lost Doulichion], Athens: Periplous Editions, 2002. Both put forward new ideas in connection with the preparations and proposed agenda of the forthcoming conference on the ‘biography’ of the Homeric and the Mycenaean topography of Western Greece.
In these pages we hope to prove that the topography of the epics presents the most authoritative and lucid picture of the Late Bronze Age we could possibly have had. The resulting ‘snapshot’ is so accurate and so up-to-date that there is no doubt in our minds about when and for what reason it was taken.
We can now say that the person who took the ‘snapshot’ – and hence the composer(s) or compiler(s) of the epic was or were evidently acquainted in great detail with the Bronze Age environment he or they lived in. Consequently we can now understand and explain why he or they had no knowledge of the names given to the islands in historical times.
The reliability of the topography described in the text, which is something one would naturally expect, so as to ensure the credibility of the narrative scenes, is triumphantly confirmed by dozens of other ‘high-definition snapshots’ of that period; and these in turn confirm the overall picture beyond all argument, even to the sequence and orientation of the islands, the sailing times from one to another and abstruse details of their general appearance and morphology. (See the walking tours and the descriptions of the Cave of the Nymphs, the harbour of Rheithron, the Asty, etc.)

Following the course taken by Athena (Od. 13.344)  (‘But come now, to convince you I will show you the land of Ithaca’), it is worth trying again, even after a lapse of three thousand years, to see whether it is possible for Bronze Age Ithaca to be revealed to our view not only by the processes of archaeology but in exactly the same way! The chosen ‘talking pictures’ of the places on Odysseus’ Ithaca must then be of such superlative quality, and so striking, as to be capable on their own of ‘scattering the mist to reveal the land’, so confirming Homer’s descriptions, for only by seeing those places with our own eyes will we be able to tell where we are.

How true, realistic and accurate could this extreme case possibly be which, so to speak, puts our rational thinking to the test? Can there really be any ‘talking pictures’ that carry the same weight as the archaeological evidence?

The answer, fantastic though it may seem, is this: yes, there did then exist and do still exist the same unaltered images, giving rise to the same conclusions and the same feelings. The only problem that existed then and still exists today is the thick fog of the dark ages that still shrouds the landscapes of prehistoric Greece.
The ‘talking pictures’ arising from Homer’s descriptions are there to reveal the landscapes once again and put us firmly on the trail of Odysseus. 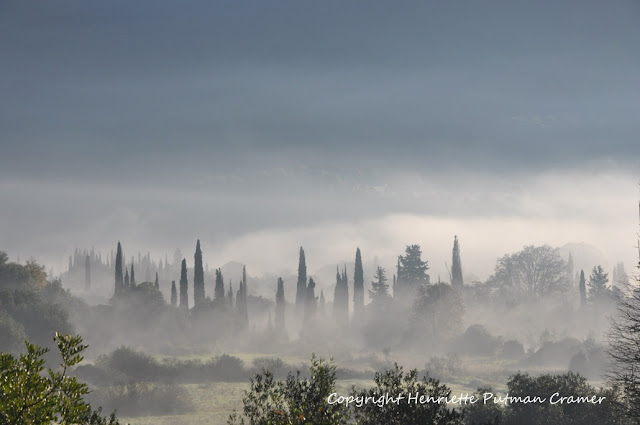 
When Odysseus arrives back in his homeland and Athena appears to him, he does not recognize her. So what does she do to persuade him that he really is back in Ithaca? She "scattering the mist to reveal the land’" and Athena shows him two of the most unmistakable landmarks of his homeland, which anyone who was familiar with them could not fail to recognize.

‘But come now, to convince you I will show you the land of Ithaca.
This is the harbour of Phorkys, the old man of the sea;
here at the head of the harbour is the long-leaved olive tree;
and near it is the lovely, shady cave
sacred to the nymphs that are called Naiads.
This is the spacious, vaulted grotto in which
you have offered many solemn hecatombs to the nymphs;
and over there is Mount Neriton, clothed with its forests.’


What, then, were those two well-known, distinctive and unmistakable landmarks in the landscape of Homeric Ithaca which would be enough to convince Odysseus finally that he was in his homeland?
According to Athena, the goddess of wisdom and knowledge, one was the famed Cave of the Nymphs. the Naiads (ἱρὸν νυμφάων, αἳ νηϊάδες καλέονται)·, close by the harbour of Phorkys; the other was the equally famous Mount Neriton, which Odysseus mentioned to Alkinoos, king of the Phaiakes, as the most recognizable feature of his homeland: ναιετάω δ᾽ Ἰθάκην εὐδείελον· ἐν δ᾽ ὄρος αὐτῇ Νήριτον εἰνοσίφυλλον, ἀριπρεπές (‘I live in clearly-seen[*] Ithaka, where there is a majestic mountain, Neriton [huge], covered with waving forests’).


Let us then visit those two landmarks. Here the saying ‘One picture is worth a thousand words’ is very much to the point.
1.- Τhe world famous lake-cave "Melissani" on Kefalonia: Τhe mysterious "Cave of the Nymphs", one of the unmistakable landmarks in Homeric Ithaca's landscape.
http://homericithaca.blogspot.gr/2016/06/he-world-famous-lake-cave-melissani-on.html

[*] Visible to mariners from afar because of its ‘conspicuous’ (εὐδείελον), ‘majestic’ (ἀριπρεπές) mountain.


[1] Vangelis Pantazis,«Το μέγεθος της Ομηρικής Ιθάκης» [‘The Size of Homeric Ithaca’]. Kefalliniaka Chronika 8 (1999) 267-274.
[ Until recently, the dubious line describing Ithaca as ‘not broad’ (οὐδ᾽ εὐρεῖα) gave rise to serious differences of opinion. It was relied on as the main argument in support of the case for accepting the island now called Ithaki as Homer’s Ithaca, as Ithaki is certainly ‘not broad’, while Kephallenia is much too big to have been the island that Homer was referring to. On this subject the historian Vangelis Pantazis, in a paper (in Greek) entitled «Το μέγεθος της Ομηρικής Ιθάκης» [‘The Size of Homeric Ithaca’], Kefalliniaka Chronika 8 (1999) 267-274, cited conclusive evidence proving that the authentic Homeric line refers to Ithaca as ευρεῖα (broad, large), not as οὐδ᾽ εὐρεῖα or οὐκ εὐρεῖα: the alteration was made later in various versions to make it match the reality of historical Ithaki. According to Dr. Pantazis, the original line «οὐδὲ λίην λυπρή, αὐτὰρ δ᾽ εὐρεῖα τέτυκται» was discovered in a work by Tryphon Grammatikos (1st c. b.c. – 1st c. a.d.) published in the third volume of Anecdota Graeca by J.F. Boissonade.  J. La Roche’s firstly published this text in his annotated edition of the Odyssey (Homeri Odyssea) in 1868. This discovery restores not only the actual structure of the line in question (Od. 13.243) but also the extremely problematic line 118 in Book 24 of the Odyssey, where again, as shown by Dr. Pantazis in his exhaustive analysis, the word εὐρεῖα applies to Ithaca and not, of course, to the πόντος (sea), which appears to have been substituted for the original νῆσος (island). Support for the description of Ithaca as ‘broad’ or ‘large’ is to be found in an elegy on Homer’s love of Penelope by the Colophonian poet Hermesianax, who uses the adjective εὐρείης when referring to Penelope’s home island. The relevant passage is preserved by the sophist Athenaeus (Deipnosophistai, XIII.597).
Αὐτὸς δ᾽ οὗτος ἀοιδός, ὃν ἐκ Διὸς αἶσα φυλάσσει
ἥδιστον πάντων δαίμονα μουσοπόλων
λεπτὴν ᾗς Ἰθάκην ἐνετείνατο θεῖος Ὅμηρος
ᾠδῇσιν πινυτῆς εἵνεκα Πηνελόπης,
ἣν διὰ πολλὰ παθὼν ὀλίγην ἐσενάσσατο νῆσον,
πολλὸν ἀπ᾽ εὐρείης λειπόμενος πατρίδος·
ἔκλεε δ᾽ Ἰκαρίου τε γένος καὶ δῆμον Ἀμύκλου
καὶ Σπάρτην, ἰδίων ἁπτόμενος παθέων. ]
[2]  Odysseas Metaxas, «Η Βιογραφία της Οδύσσειας» [‘The Biography of the Odyssey’] (in preparation).
[3]  Porphyry, Περὶ τοῦ ἐν Ὀδυσσείᾳ τῶν Νυμφῶν ἄντρου.
[4]  Strabo, 1.3.59.
[5]  Porphyry, Περὶ τοῦ ἐν Ὀδυσσείᾳ τῶν Νυμφῶν ἄντρου.
Αναρτήθηκε από Homeric Ithaca στις Τετάρτη, Φεβρουαρίου 24, 2016