The excellent communication between Homeric Ithaca and the mainland of Elis (Northwestern Peloponnese) .

We have intentionally left till last the matter of the excellent communication and close relationship between Homeric Ithaca and the Kyllene region of Elis. Homer makes it clear that this relationship applied to the ordinary people of Ithaca as well as the nobles when he tells us (Od. 4.632-637) that Noemon wanted his ship back to cross over to the plains of Elis, where he had some mares and young mules, and bring one of them back to be broken in.

‘Have we any idea,’ he asked Antinous, ‘when Telemachus comes back from sandy Pylos, or don’t we know? He has gone off with my ship; and I happen to need it,to cross over to Elis, where the fields are big and I keep a dozen mares. They have some unweaned mules not broken in yet to the work they’ll have to do. I want to drive one off and train him.’

If Homeric Ithaca were to be identified with present-day Ithaki (especially with its main town in the northern or central part of that island) or Lefkada (Lefkas) or anywhere in northern Kephallenia, the most accessible parts of the mainland for close and frequent contact of that kind would obviously be the coastal plains of Aitolia and Akarnania: (Epeiros) not Elis, which is too far away for regular visits. 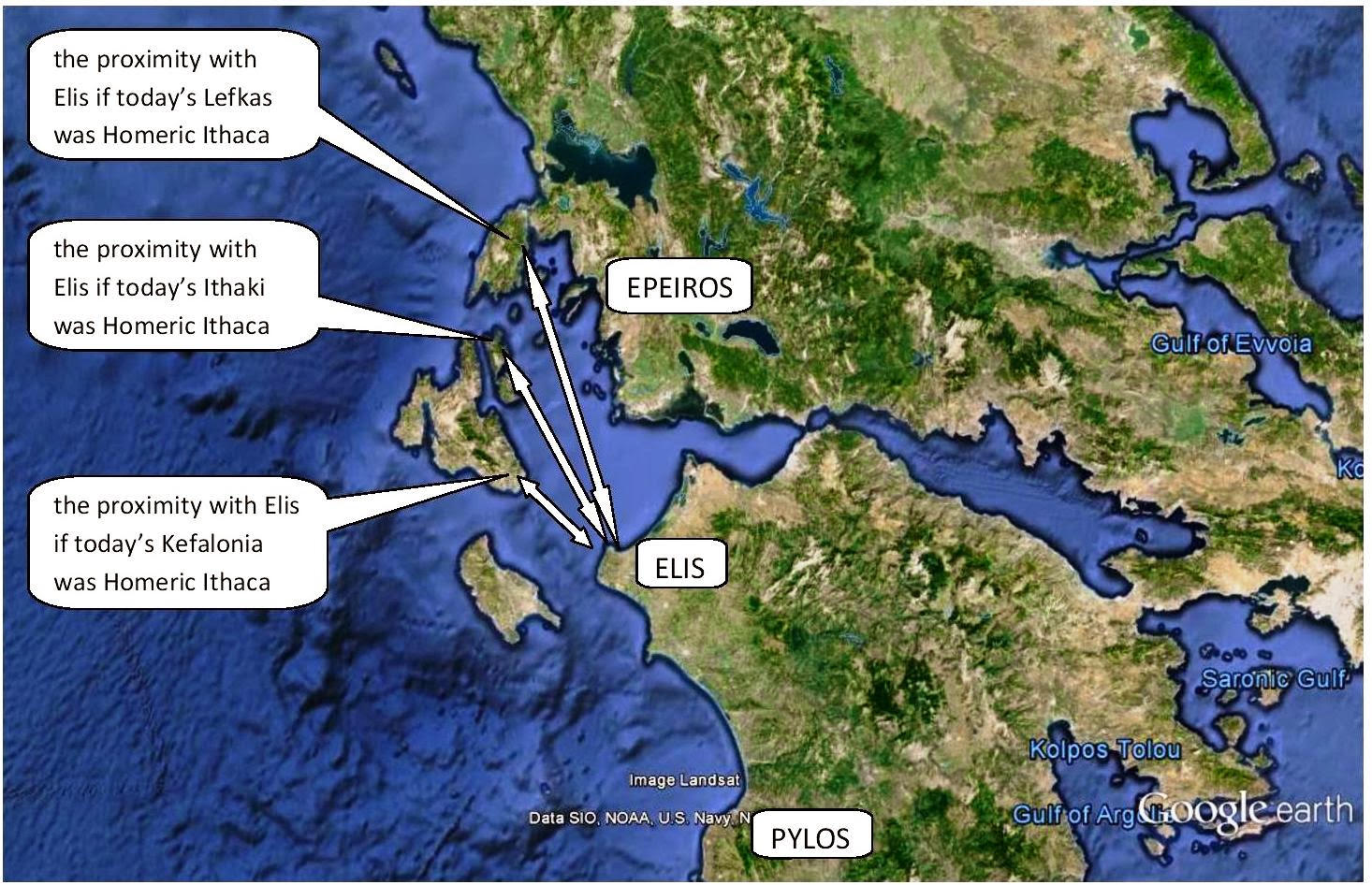 Nor is it a coincidence that when Eupeithes calls on the fathers of the suitors (whom he calls ‘Kephallenians’) to hurry after Odysseus and prevent him from leaving the island, he says, ‘Before he can fly to Pylos or to Elis’:


‘Friends, I denounce Odysseus as the inveterate enemy of our race. Where is the gallant company he sailed away with? Lost by him, every one; and our good ships lost as well! And now he comes home and slaughters the very pick of the Cephallenians! Quick, I say. Before he can fly to Pylos or to Elis where the Epeians rule, let us make a move, or we’ll never be able to hold up our heads again.’

Homer is right when he makes Eupeithes suggest Elis (Kyllene) and Pylos as the likeliest places for Odysseus to escape to, because the simple fact is that from southeastern Kephallenia – posited as the location of Homeric Ithaca – Kyllene is the nearest place on the mainland in the whole of Greece. The fact that nowadays the ferries to Poros run from Kyllini proves the point amply, if proof were needed.

The existence of these close contacts is confirmed by Proclus[i] in his summary of the Telegonia, where he states that immediately after the burial of the suitors Odysseus set off for Elis to inspect his herds of cattle.

"The suitors are buried by their families. Odysseus, after sacrificing to the Nymphs, sails off to Elis to inspect his herds. He is entertained by Polyxenus, and receives the gift of a mixing bowl, on which is represented the story of Trophonius, Agamedes, and Augeas.Then he sails back to Ithaca and performs the sacrifices specified by Teiresias"

Another serious argument against equating Ithaki with Homeric Ithaca – an argument based on factual reality – is that it hardly seems possible that a ruler whose domains included Kephallenia, Zakynthos, Ithaca, ‘Epeiros’[ii] (Leukas and Akarnania-Epeiros) and ‘Antiperaia’[iii] (Kyllini and Araxos in the Peloponnese) would choose to have his administrative centre on the smallest, least fertile and most arid island in his kingdom. What is more, present-day Ithaki is badly situated (and Lefkada even worse) to be the administrative centre, as it does not control the main seaways in the region, especially the entrance to and exit from the Gulf of Patras, nor does it fully control the sound between Kephallenia, Ithaca and Aitolo-Akarnania leading to the north-west (Corfu and Apulia), nor the passage between Kephallenia and Zakynthos leading to the west (Sicily), nor the passage used by ships heading to or from the Peloponnese and the great Mycenaean centres of Pylos and Crete(See map, satellite images and photographs).The paucity of Mycenaean sites and finds on modern Ithaki[iv] confirms that during the Mycenaean period there were very few Late Bronze Age buildings on the island, and those very humble. It need hardly be said that the same is true of Lefkada.


A geographical comparison between southeastern Kephallenia and Homer’s Odyssey leads inescapably to the conclusion that the geographical features of Odysseus’ Ithaca, as described by Homer, correspond in every respect with those of the south-eastern Kephallenia, down to the smallest particular. Moreover, the order in which Homer lists places in Ithaka is demonstrably the same as the order in which the corresponding places come in the Pronnoi district. It should also be emphasized that the geographical features mentioned by Homer as landmarks of Ithaka are identical with the main landmarks of the broader region southeastern Kephallenia and the surrounding districts, which, as we know, have given the Kephallenian landscape its unique character through the ages.